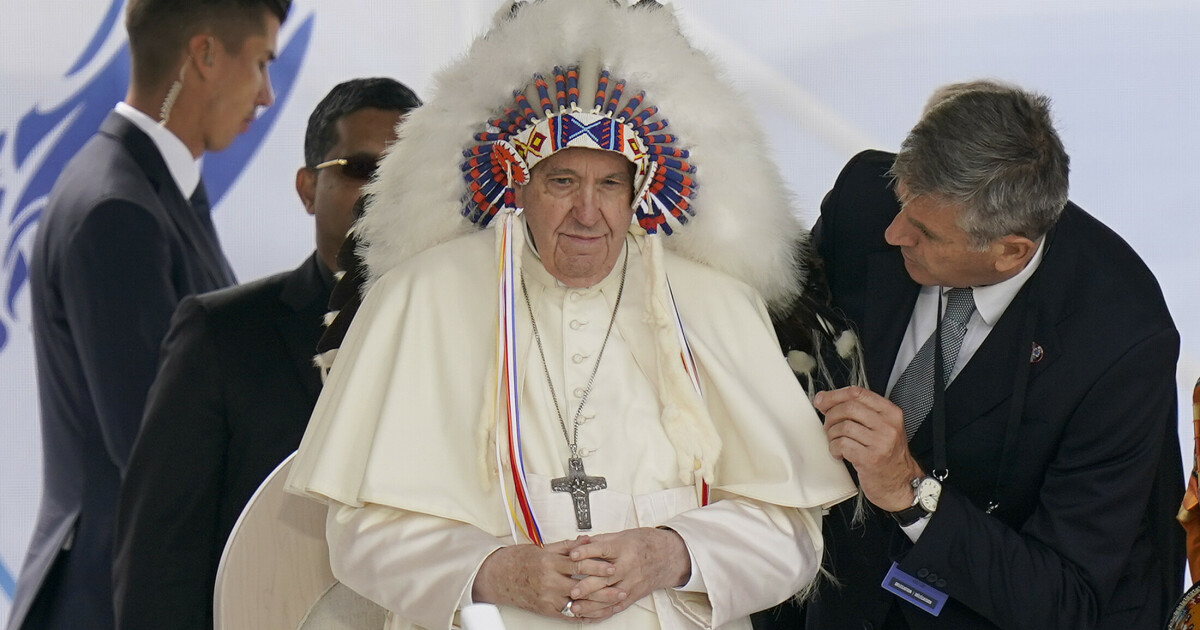 Monday was a historic day for Indigenous people in Canada, when Pope Francis asked for forgiveness from Indigenous Canadians who were abused in Catholic residential schools.

It was during a visit to one of the aforementioned former boarding schools in Alberta that the pope spoke about forced assimilation and what he called “cultural destruction.”

– I humbly ask forgiveness for the evil committed by so many Christians against the indigenous peoples, said the Pope.

He has already apologized for the abuse, but this is the first time the pope has made the same message on Canadian soil. In his speech, he condemned the policy of assimilation which, for several decades, deprived the children of the indigenous population of language, culture and identity.

According to those present, the speech made a strong impression. People must have both cried and applauded.

– I waited 50 years for this apology, and today I finally received it, said Evelyn Korkmaz, who herself was a student in one of the Catholic boarding schools.

Much of the criticism is aimed at the fact that the pope was given a traditional colorful headgear after the speech. The feather ornament was, according to AP, given to the Pope by Chief Wilton Littlechild. Littlechild himself attended one of the notorious boarding schools.

The headdress has always been a symbol of respect, worn by warlords and warriors.

In recent times, a number of non-indigenous peoples have come under fire for treating headdress as a costume.

Not everyone, therefore, was impressed with the leader’s choice to give this to the Pope and pointed out that it did not fit the role of the Catholic Church in the Church-owned boarding schools that Pope Francis complained about.

– It seems everyone in Alberta wears a hat whether they deserve it or not, writes Russ Diabo Twitter.

He is from the Canadian Kahnawake Mohawk Tribe and is an Indigenous activist and political analyst.

In addition to the Twitter message, he attached a number of photos of well-known profiles wearing the traditional headgear, including Pope Francis and Canadian Prime Minister Justin Trudeau.

– My apologies to anyone who is activated by these images. Some of us laugh at the absurd when we are bored, she writes and attaches a retouched photo of the pope with the headdress.

Several also used the hashtag #fauxpology in the discussion of the speech.

– I have a lot to say about this, and it’s all negative, writes Joe Horse Capture, vice president of native collections and curator of Native American history and culture at the Autry Museum of the American West in Los Angeles.

He points out that the pope received the headgear without asking for it.

– It’s not his fault, but it’s also clear that the donors didn’t think about how it would make other performers feel, writes Black Elk.

Littlechild has so far not commented on the review. He is nevertheless defended by several teams.

– It hurts me to see that people criticize my grandfather, and I understand how much respect it takes to be able to receive the headdress. At the same time, it was he who showed respect to the pope for coming all the way here to apologize, writes the grandson.

Jon Crier, who attended the ceremony, told a press conference after the speech that the headdress symbolized the tribal chiefs’ adherence to the pope as the leader of the local community.

The context of the Pope’s visit to Canada is that in April he was visited by a delegation of the indigenous people of Canada at the Vatican.

The scale of abuse during the policy of assimilation became known after around 1,300 unmarked graves were discovered in Catholic boarding schools closed since May 2021. The graves belonged to children who lived in the schools. Many of them have been physically and sexually abused by teachers and school principals. Several thousand people are thought to have died of disease, malnutrition and neglect.

The abuses were both “physical, verbal, psychological and spiritual,” the pope emphasized in his speech on Monday.

– I want to establish this myself, with shame and unequivocally, he said.