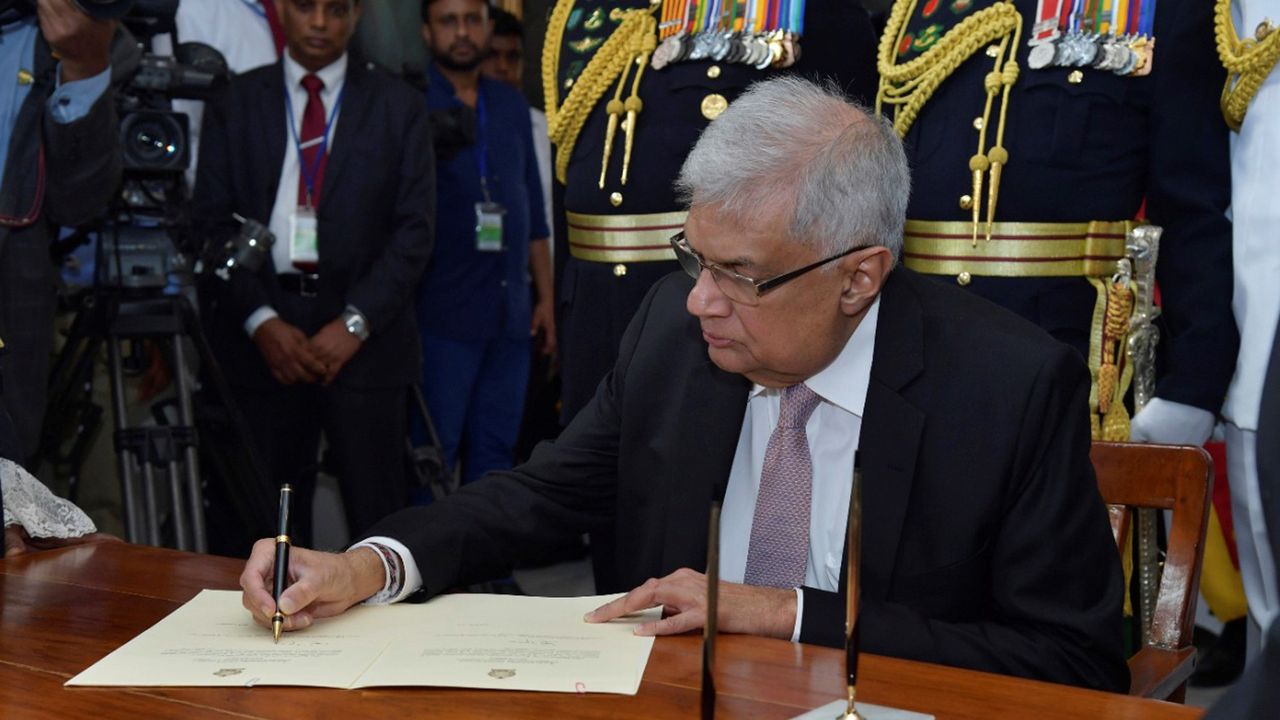 In the early hours of Friday morning, hundreds of Sri Lankan soldiers and police attacked Colombo’s central protest camp, Galle Face Green. State forces attacked protesters with balaclavas on their faces and wielding batons, as well as heavy weapons, injuring dozens so badly that many had to be hospitalized.

The raid, which took place in the dark at 2 a.m., is Ranil Wickremesinghe’s first official act after being sworn in as Speaker of the Sri Lankan Parliament on Wednesday. It is a clear warning of what the right-wing, imperialist-backed leader of the United National Party has in store.

Since his predecessor, former President Rajapakse, fled the country last week as a criminal, Wickremesinghe has pledged to quell the massive protest movement that has rocked the island for the past three months.

Friday morning’s attack was directly initiated by Wickremesinghe, who declared on Wednesday evening shortly after his inauguration: “We will deal with them firmly, in accordance with the law. We will not allow a minority of protesters to suppress the aspirations of the silent majority, which is fighting for change in the political system.

Claims that protesters are a “minority” oppressing a “silent majority” are pathetic lies that no one will believe. The protests and strikes were the largest in Sri Lanka’s history. What Wickremesinghe really foreshadowed was the deployment of massive military force to try to crush this massive movement.

The morning raid went ahead despite protesters saying they wanted to end the occupation of the Presidential Secretariat, located opposite Galle Face Green. Their assurance was in response to warnings from Wickremesinghe that any occupation of public buildings was illegal and those involved would be dealt with according to law. The raid was planned in the middle of the night, to catch protesters while most were sleeping and to ensure the attack was not met with any wider mobilization.

State brutality included the police assault on a British Broadcasting Corporation (BBC) journalist. An unknown number of those attacked had to be hospitalized and some were seriously injured.

The attack is a step forward in a feverish campaign by the political elite to restore capitalist rule. This is taking place under conditions of massive hostility towards the entire political establishment. The protesters’ call now, after demanding Rajapakse’s resignation, is for Wickremesinghetil to step down. He has no popular support and was not elected president by ordinary citizens of the country, but by parliament.

“Down with the 225 parliamentarians” is a long-standing popular demand of the working class and the protest movement.

While overseeing the crackdown on protesters, Wickremesinghe reiterated his call for all parliamentary parties to support him. Referring to the fraudulent electoral process on Wednesday, he said: “We have been divided over the past 48 hours. This period is over. Now we have to work together.

Dallas Alahapperuma, Sri Lankan MP Podujana Peramuna (SLPP), who was a presidential candidate, and Sajith Premadasa, leader of the opposition Samagi Jana Balawegaya (SJB) party, who backed the former in the election, have already indicated that they are willing to cooperate with Wickremesinghe.

Premadasa met Wickremesinghe at a party leadership meeting in parliament on Thursday, where he said they had “a friendly and frank exchange of ideas and I reiterated the opposition’s determination to provide a constructive support to avoid misery and disaster”. All parliamentary parties have previously declared their willingness to implement the austerity measures demanded by the International Monetary Fund (IMF).

The answer of big deal on Rajapakse’s installation was summed up by the highest level in five weeks on the Colombo Stock Exchange, after his election on Wednesday, indicating confidence that his ruthless implementation of austerity measures will boost their profits.

US Ambassador Julie Chung then tweeted that she looked forward to working with Wickremesinghe and reiterated her call for all parliamentary parties to work together. “In these difficult times, it will be crucial for all parties to redouble their efforts to work together to address the economic crisis, uphold democracy and accountability, and build a stable and secure future for all Sri Lankans,” she said.

Given Wickremesinghe’s track record as a trusted agent of US imperialism, Washington’s course of action now is to work to integrate Colombo more closely into the US military-strategic offensive against China.

The Indian High Commission in Colombo issued a carefully worded statement, acknowledging the new president, while making it clear that India is sensitive to the deep hatred of the Sri Lankan masses for the ruling establishment in Colombo and the aggravation of the economic crisis.

“As a close friend and neighbor of Sri Lanka, and also as a democracy, we will continue to support the Sri Lankan people’s quest for stability and economic recovery, through democratic means and values, established democratic institutions and constitutional frameworks,” the statement said.

An anonymous senior Indian official quoted in Indian Express said: “He faces some very tough challenges… winning the election is one thing, getting the job done [i tide]this is his true test.

These statements underscore the concerns of India’s ruling elite about the ability of the new regime to quell the inevitable outburst of opposition to the IMF’s planned measures from the already starving working masses. The escalating socio-economic and political crisis in Sri Lanka is the starkest expression of global economic turmoil, exacerbated by the ongoing coronavirus pandemic and the proxy war between the United States and NATO that pits Ukraine against Russia.

Central Bank Governor Nandalal Weerasinghe in recent comments to international media said that over the next five months the people of Sri Lanka will face severe hardship. He had previously predicted that Sri Lanka’s current inflation rate of around 50% would quickly rise to 70%, stressing that a “stable” government was needed to finalize an IMF deal.

Just hours before Wickremesinghe was officially sworn in as president, IMF Managing Director Kristalina Georgieva said she hoped their so-called bailout talks could end “as soon as possible”. She also cautioned, saying: “It is understood that protracted negotiations are simply not sustainable and that there must be decisive action within weeks of a [ny] the government is in place. »

In other words, the IMF is reinforcing its message to Wickremesinghe, who has demonstrated time and time again that he will do whatever it takes, including the ruthless use of police and military power to crush all political opposition and impose justice. IMF austerity assault on the working class and oppressed masses.

This attack will inevitably intensify the social resistance of the working class.

As executive chairman, Wickremesinghe has sweeping autocratic powers to unleash police and military repression against all opponents of the austerity program. Friday morning’s attack is a foreshadowing of what he plans more generally.

Wickremesinghe’s delivery to the presidency and his efforts to implement this program depend entirely on the opposition parties and their supporters.

While the SLPP, SJB and other parliamentary parties are now working with Wickremesinghe to establish a multi-party caretaker government, the various pseudo-left organizations and unions are tireless in their efforts to divert workers, youth and the rural poor to the back. these reactionary maneuvers.

The Socialist Equality Party (SEP) is alone in warning that the Sri Lankan working class must prepare politically and organizationally for mass struggles against this brutal pro-IMF regime and the capitalist profit system, based on of a socialist and internationalist program.

In a statement of decisive importance published yesterday, the SEP called for preparations for the convening of a democratic and socialist Congress for the workers and the rural masses. This congress will be composed of action committees, formed by the workers and the workers themselves, to organize and coordinate the struggles they will engage in.

The statement explains that the fight for a Democratic and Socialist Congress, bringing together a wide network of such committees, provides “a political strategy for the working class to consolidate its forces, win the active support of the rural masses and lay the foundations for its own power through a workers’ and peasants’ government, committed to restructuring society along socialist lines.

Workers, youth and the rural masses must study, discuss and act on the revolutionary program laid out in this declaration.